The Long term Costs of Picking Mutual Funds over ETFs

Picking a mutual fund with a 2.2% MER that has the same stocks as an exchange traded fund with a 0.06% MER can reduce your portfolio balance after thirty years by as much as 48%.
Many mutual funds have a MER that is higher than the dividend yield.  Really think about that.  You are taking all the risk and the mutual fund company is collecting a fee that is equal if not higher than your dividends.  If some snake oil salesman came to your grandparents door and said he would invest their portfolio and take all the dividends for himself, you would be calling the cops.
If the mutual fund held the same stocks as the Vanguard Canada ETF then your balance would have 35% and 48% less after 20 and 30 years respectively.  The cumulative costs sound unbelievable, that is why we put the math behind the numbers for you.

The Annual Balance on a $10,000 Initial Investment 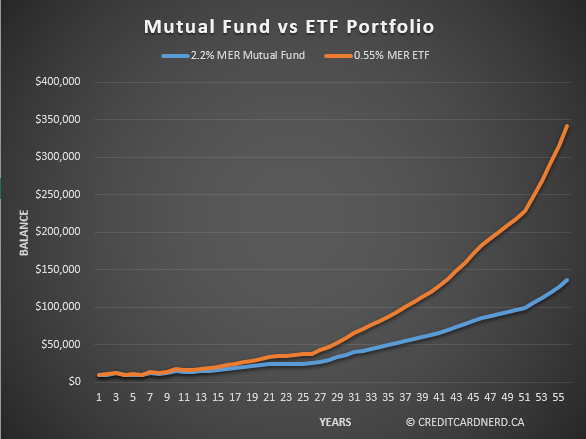 The numbers are real and if you can prove me wrong, then let us know.  We even went with the XDV for comparison so that you can see that even a modest improvement in your portfolio expenses can go a long way.
One of the more important points to remember is that MER is an expense on your balance and does not necessary reflect on the risks and/or performance of a particular fund.
Important Note: This is not a article on selecting what to put in your own portfolio, but merely an illustration on the cumulative long term effects of MER between two different products and there is no guarantee that an ETF will outperform a particular mutual fund. 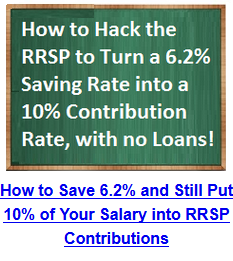 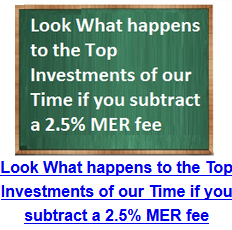