A 19.99% interest rate that is compounded monthly will compound at a rate of 21.9% annually.  (19.99%/12)12 = 21.9%.
The tax rate we used was Ontario's top marginal tax rate for capital gains (26.77%) and Ontario's top marginal tax rate for the dividends (53.53%).  We used the regular marginal tax rate, because dividends derived from U.S. corporations are not eligible for the dividend tax credit.
Below we have a chart with the richest Americans, excluding those that made their billions with a private company.  The first column is the billionaire, the company they built and the IPO date of the stock.  The next column is what your credit card balance would be if you could theoretically buy stock on a credit card and never pay it off.  The third coloumn is the stock value from an initial $10,000 investment, the total amount of dividends that were paid and the net balance after taxes have been paid.
The numbers won't be exact, to keep the calculations simple, we didn't factor in the exact month that the company had their initial public offering.  We also removed any Americans that made most of their wealth and still have most of their wealth in private companies.


1 Not when Berkshire Hathaway had its IPO, but on the first date that Warren Buffet started accumulating shares at only $7.60 a share.
2 Not an exact number, we didn't calculate every last dividend back in the 70's, but we rounded it up to the nearest $100,000.  The cumulative total of all the dividends paid in the 70's, won't even come close to one quarterly payment in 2016.

If you think that you will be okay if you keep having a substantial balance on your credit cards, then you might want to think again.  Even some of the top billionaires in North America, can't multiply their wealth quicker than a credit card balance can take it away.  The numbers will more than likely only get worse.  Probably by the end of the decade, only one or two of the current richest Americans will be ahead of the credit card debt rate starting at their initial public offering date. 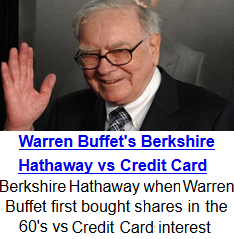 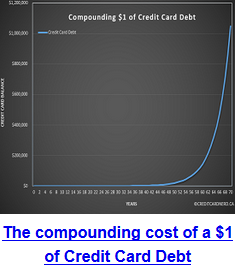